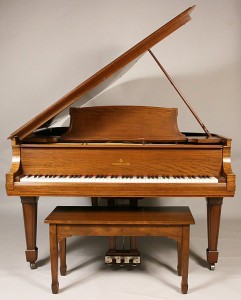 Probably nine to ten times as many used pianos as new ones change hands each year. While there are no exact figures available because of difficulties in tracking used and private party sales, this figure is based on some fairly conservative assumptions that are generally accepted by the piano industry. One of these assumptions is that the average life expectancy of a piano is thirty years. We know that many pianos last far longer than this, especially high quality ones that have been restored or rebuilt, often multiple times. Granted, there are also pianos that have succumbed to fire, flood, termites, moving damage, abuse, neglect or other types of destruction before their time. Some pianos, just like fine furniture or other heirlooms, stay in the family for several generations, being passed along from parent to child or grandchild. Others remain only long enough to find out if someone in the family is interested in piano, sometimes not more than a few months. Suffice to say that there are simply a lot more used pianos out there than new ones, and a lot more people who feel they will get the most for their money in the used market. Besides being kept in the family, a huge number of used pianos are also sold each day through classified ads, auctions, estate sales, garage sales, on-line auction sites such as eBay®, other on-line piano listing sites such as Park Avenue Pianos, rebuilders, refinishers or wholesalers; are traded in for new ones; or are donated to churches, schools or other music organizations.

One U.S. manufacturer of high quality pianos once stated that their biggest competition were the pianos they had already made and sold in previous years. Because they were so well-built and lasted so long, their used pianos were often considered as good a value as (or sometimes even a better value than) their new ones. Many musicians today look specifically for vintage instruments, ones that they feel often sound better than the new ones and don’t cost as much.

Aside from all the propaganda you may hear about the latest designs, technological advances and space age materials, the piano remains, overwhelmingly, a creature of yesteryear’s fine woodworking techniques and skilled craftsmanship. Today, unfortunately, in many of the remaining piano factories in the U.S. and abroad, we have far more machine operators and semiskilled labor than apprentices or master craftsmen.

Today, it is all-too-evident, to many pianists and technicians, that production line mentalities, deadlines, quotas, and semiskilled labor pools currently in vogue, do not easily fit hand in hand with the making of a great, or even good, instrument. In addition, in eras past, lumber would be seasoned for up to seven years before it was considered acceptable for use in a piano. Nowadays you will be extremely lucky to get wood that has been cured for a year or two. I think this is why an educated public today is often found buying vintage pianos that are either still in good condition, or have been rebuilt by a reputable firm, because they realize that they are getting a good foundation (i.e. the piano was built well to begin with.)

One other point I cannot overemphasize, when considering new instruments vs. used, is that names can both inform, and mislead. Many of today’s new pianos may have the same brand names as yesteryear’s quality instruments, but they may not be anything like them. Piano names and companies, unfortunately, can be, and often are, bought and sold like chattel, by persons with little understanding or appreciation for the instrument’s legacy or worth, beyond the profit margin (or the bottom line, as it is often, ironically, called). Designs and specifications are often changed, for the worse, or inferior materials or parts are substituted, in order to meet short term financial objectives, achieve an expected profit margin, or locate a piano at a certain pricing point. In addition, when a manufacturer perceives an ignorant buying public doesn’t appreciate or care about certain quality features in the original design of the piano, those features and/or quality are often quietly dropped or abandoned. Also, management with financial background, training, and objectives, but little piano building expertise, will often make poor decisions which adversely affect the quality of the finished product. And artisans with generations of piano making experience will frequently resign, or be dismissed, when they refuse to sacrifice quality for profits.

I don’t mean to paint a bleak picture of the piano industry as a whole. In my experience, most of the people laboring in the piano business are altruistic individuals, dedicated to the promotion of good music, good instruments, and to helping others before they help themselves. However, as in other industries, there are still those who put their own priorities first; whose object often is to “reap where they have not sown,” in other words, to live off the reputation of a once great piano name, without delivering the goods. Too many new pianos being sold today bear little resemblance, either in design or quality, to the original instrument that established the name. It is quickly becoming apparent to many, both inside and outside the industry, that through either consumer apathy, or corporate greed, the standard of what used to be considered a quality piano is being eroded. I realize it’s important to be able to make a buck in this competitive world we live in. But more and more frequently people, relying on a name, and not knowing much about pianos, buy what they think is a real piano but end up with a P.S.O. (“piano-shaped object,” in the industry lingo.)

Having said this, it is important to state also that not all older pianos are wonderful. As is true today, there were pianos designed to make music, and pianos designed to make money. There are “vintage” pianos and ones that are simply “used.” And while many older pianos may have had little wear, having sat mostly unplayed in someone’s living room, others will be worn out or in need of complete rebuilding or refinishing. It is true that pretty much any piano can be rebuilt, but it can get quite expensive, and the cost may not be justified by the final result. A competent appraisal can tell you which pianos are which.

In addition, many pianos made before 1900 are not what are considered “modern” pianos. In short, this means these earlier instruments were made when they were still figuring out the best way to build pianos. Many of them have shortcomings in either design or construction that make them less satisfactory as musical instruments than their modern counterparts. Specifically, many of them may have archaic action designs that are compromised in terms of touch and responsiveness or reliability; or they may have structural deficiencies that affect their ability to stay in tune or render an acceptable tone quality by today’s standards. While instruments such as the “square grand”, the “birdcage upright,” and the “cottage piano” (to name just a few of these artifacts), may have historical, antique or sentimental value, their ability to provide a satisfying or meaningful musical experience for you or your child are limited. This is not to say that there weren’t excellent pianos made before 1900. Many grands of better make, made between 1875 and 1900, may have, for example, only 85 keys instead of the modern 88, or only two pedals instead of 3. In most all other respects, however, they may be modern instruments, providing an experience and a investment value similar to that of modern high quality grands. (The missing 3 notes at the top of the keyboard are seldom used in most classical and other types of music, and that goes for the middle pedal as well.) It is a far different matter, though, if you are looking at an antique “English upright” or “cottage” piano that has a much shorter keyboard than a modern piano, or is missing the modern cast iron frame that allows it to stay in tune.

The period from about 1875 until about 1910 was a transitional time in the evolution of the piano, where both “archaic” and “modern” features were being utilized, and pianos from that period really must be judged individually, on the basis of their respective designs.