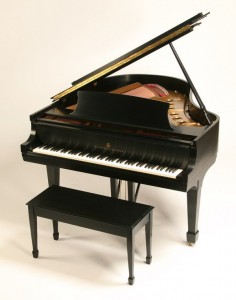 The reasons that pianos are bought are as numerous and diverse as the people who buy them. But heading the list of criteria that usually qualify one instrument over another are tone (i.e. sound quality) and touch (i.e. feel of the keys & action when playing), which to the lay person can seem like nebulous and vague quantities, if indeed quantifiable at all. Pianists and musicians who have been around the piano world, and who are “experienced” in what is considered a good sound and a good feel in a piano, are also those generally considered qualified to judge; all other mortals usually must take their word for it (unless they have strong opinions of their own, and there they are on their own!)

Just as you would pick a stereo system for it’s particular sound (and how it rattles your windows), pianists choose a piano because they like what they hear, and they like what they feel when they play or listen to it. (They may even like the way it looks.) And there are certain pianos that have come to be accepted as having a likeable (or attractive) sound or feel.

Now what pianists and other musicians like in a piano sound can vary tremendously, just like everyone else’s taste in art or music. Some pianists like a very powerful, loud, projecting tone with a deep bass, a sound that shouts “listen to me, pay attention to me.” Others like a “pure” tone, one that is “refined” and “elegant”. Still others like a tone that sings, and they usually have certain very strong ideas, (or opinions), about what sings and what doesn’t. Yet others like a mellow sound (ooh, there’s that word again). And yet others want a sound that reminds them of something, something, long ago, somewhere in the past… “if I could only remember”… well… it’s hard to describe. And there are so many different adjectives, and everybody, I mean, everybody seems to have a different definition of what those adjectives mean.

As an example, for those who want to be on the safe side of what pianists and other musical and non-musical people generally like (is there such a thing as safe where politics, religion, or music is concerned?) the generally accepted “standard” for many years has been, of course, Steinway. This is because much, if not most, of the classical and symphonic music, and also popular music, available on recordings, tapes, and CDs, and over the air on radio and television, over the past century has generally featured artists performing on the Steinway piano. As a result, our ears have become somewhat accustomed to, and accepting of, the “Steinway” sound. (You will of course realize that this is sort of a “consensus” criteria, but it’s important to recognize it for what it is. Much of the music we like, generally, is what we are accustomed to listening to (but not to excess!) There. That’s all the lecture on aesthetics for now.)

Since artists are often expected to perform on Steinway pianos, it’s not a bad idea for them to be acquainted with that particular touch. Many piano teachers encourage their students to practice on Steinways (“after all,” they tell their students, “if you get really good then you will be playing mostly on Steinways”… …Whether this is really true or an outright fabrication put into circulation by the local Steinway dealer is beside the point. The expectation has been planted. (Not every artist is enamored of the Steinway “feel” however. The great pianist Ignacy Jan Paderewski, for example, perhaps one of the most effective advertisements of all time for the Steinway piano, found the Steinway touch intolerably heavy and fatiguing, and asked them to change it on the instruments supplied for his concerts, which they did. Other pianists, as well, have observed that while the Steinway action may render excellent service as a weight-lifting machine to strengthen the fingers, it is not always the most rewarding to perform on. While some of the problem has been addressed since Paderewski’s time, many pianists still feel that the touch of a good Yamaha, or Kawai, is superior. More on this later. See also the article on Touchweight.)

For the above reasons, at any rate, among others, Steinway is often advertised as the “standard” piano. People who write books about buying pianos often use Steinway as a “measuring stick”, either to gauge whether other pianos measure up, or, if not, to beat them with. 😉

Is Steinway the only piano with a great sound? Absolutely not! There are many great piano sounds. Piano history is replete with great instruments: Mason & Hamlin, Chickering, Baldwin, Knabe, Weber, Bechstein, Bosendorfer, Yamaha, Kawai; these are but a few of the names – the list goes on and on. (For more names, see Vintage Pianos, in section II of this article) Many of these other manufacturers make, or have made pianos that are quite similar in many ways to Steinways (and that in some ways are sometimes even better!) There are many artists who prefer these other brands to Steinway. Often you will find that pianists have preferences of individual pianos among a number of different brands.

It’s important to understand that pianos really need to be judged individually, each one on its own merits. In other words, not all Steinways are great; nor are all the pianos of any other brand, for that matter. Because of the somewhat unpredictable nature of the materials that go into the making of a piano (wood, wool felt, cast iron, etc.) no two pianos ever sound identical. It’s always wise, if possible, to try out a number of instruments (even among those that are the same size, model and brand) because they will all inevitably sound and feel a little bit different, and you may find some (or one) you like better than others. In addition, some pianos are new, some are old, some are rebuilt, some are worn out, some need new strings or hammers. Some have been well cared for, some have been abused. Some were “an experiment,” some were just “a bad design.” Some were built by masters, some by apprentices. Some were built on a Monday, others on a Friday. Some haven’t been tuned or touched for years. There are the good, the bad, and the ugly among all makes. -Even among the Japanese pianos, which are supposed to be “all the same”. (-Or so it is said.)

But the Steinway sound (in general) is an accepted sound, and so choosing a Steinway is reasonably safe. So if you buy a good Steinway (and maintain it in good condition), you have a reasonably good chance of impressing the finicky artist who comes to play your piano. But not in every case.

Incidentally, one of the reasons why some people buy a particular piano is because of a desire or a need to impress others. (In other words, the piano is not just for themselves, but others who may happen along to see, or play it.) Okay, now that we finally have that out on the table, we can be honest and up-front about it. Let’s admit it, most folks are concerned that the first thing a guest (pianist) sitting down at their piano would do was notice the name above the keys.Well really now, how could he help but do otherwise? Why do you suppose piano manufacturers always put the name there?

Rest assured, however, that unless you are sure what kind of piano the people you are trying to impress will be impressed with, you may well be wrong!) Because of this desire to impress others with first glance, many people have assumed that they are safe if the name on the fallboard begins with S and ends with a Y. (Unfortunately, because of an inability on the part of many piano buyers over the years to be able to read, spell or even remember names, many pianos with similar-sounding names like Stanley, Smiley, Shirley, Symphony, Steinbay and even Steinvey have been sold.)

For some people, the sound or feel, or even the name, of the piano is not that important. Of more significance to them is that the piano look imposing in their home or surroundings, and be impressive in a cosmetic way. There are many piano companies who cater to this need as well: turning out gorgeous cabinetry while tending to skimp heavily on the musical portion of the instrument; relying chiefly on the furniture aspect to make the sale. Not every piano is a trade-off between sound quality and good looks, however. There are also art case pianos produced by the makers of better instruments. Pianos are both form and function; furniture and phonic. Many folks feel if it doesn’t look good, how can it sound good? (Others, especially pianists, wonder just the reverse.)

Finally, in our list of main reasons why some pianos are chosen over others, is Mr. (or Ms.) Checkbook. For most folks, this person has a great deal to say about which piano is ultimately purchased. If the piano doesn’t fit the budget, it doesn’t really make much difference how many other things it has going for it., now does it?

There are, of course, many other reasons why people will buy certain pianos. They may be looking for an instrument reputed to hold up well under demanding conditions, say, of being used in a school or recording studio. They may buy a piano because their relative, friend or neighbor just bought a certain brand, and they were impressed by it. Others simply rely on their music teacher, a family friend who plays, or even the store salesperson to tell them which brand they want.