In 1880, Steinway began producing their small Model A with a laminated maple cabinet, creating the modern “rim” case: Very long, thin (3.5 mm) planks of maple were slathered with hide glue, bent around a form, clamped together and allowed to dry. This process made rim fabrication quicker, and the resultant structure stronger and more stable. It also was cheaper, requiring fewer man-hours and being less wasteful of hardwoods that need several years of storage and precise seasoning. This speedier production method was of great advantage in a time of huge demand for good pianos. 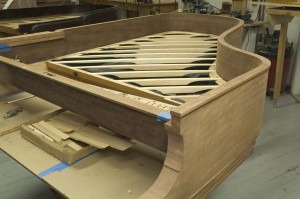 After an 1883 prototype ‘D’ received a laminated case (it was retained as a concert instrument in Steinway Hall), Steinway unveiled the 1884 ‘D’, an entirely new model with a redesigned scale (including a 20-note instead of a 17-note bass), a capo bar in both upper treble sections, a newly designed pedal lyre, and a multi-laminated case.
In subsequent years few changes occurred, though the instrument’s length increased slightly (the “rim type” D concert grand pianos from 1884 to about 1895 were only 272 cm long). However, in 1936 a soundboard based on a patent of Paul Bilhuber, an “in-law” member of the Steinway family, was introduced. Bilhuber had created a soundboard that tapered evenly from the thickest central point to a thinner perimeter, and it was judged to provide greater response and longevity.

Not all Steinway innovations were successful. In 1961, Teflon bushings for the playing mechanism were incorporated into U.S.-built grand pianos – a modification that the piano makers at the Hamburg branch did not adopt despite much pressure from the New York-based company. They were able to resist only because the profits of the Hamburg plant were greater than those of the New York factory. The Teflon bushings were intended to lessen friction problems that might occur because of seasonal humidity changes, but they themselves caused excessive friction. Further, because they were a hard and dimensionally stable substance (fixed into wood, which is not), at certain times of the year they would loosen in their holes and cause clicking during play. After years of complaints from pianists and technicians, in 1982 the New York makers re-introduced the classic felt bushings with an infused dry-grease fluid made with Teflon particles that allowed them to keep using the word Teflon in their advertising. 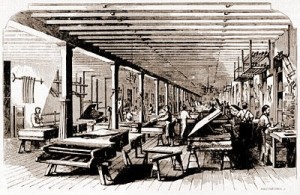 The Steinway Model D represents about 5% of all Steinway grand pianos produced, a significantly larger share of concert-grand output than the 1-2% that other manufacturers produce. An explanation is found not only in their exceptional quality but in their sophisticated marketing programs – the Steinway Artists program and the concert grand piano banks in New York City, London, and Hamburg have virtually guaranteed the loyalty of concert artists worldwide. On U.S. stages, more than 90% of performances using a concert grand use a Steinway ‘D’.