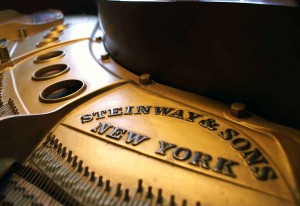 The Steinway & Sons piano company, founded in a Manhattan loft in 1853 by a German immigrant named Heinrich Engelhard Steinweg and his sons, is based today on a ten-acre factory site in the northwestern corner of Queens, New York, in the area commonly called Astoria. Steinway Creek connects the property with the Bowery Bay and the East River to the north. The office door opens onto Steinway Place, and just a block beyond is Steinway Street, one of the main thoroughfares of the neighborhood. From the factory’s south windows, you can see a bus depot operated by the Steinway Transit Company, and if you walk up the block a bit you can visit Steinway Auto Body, the Steinway Electrical Supply Company, and the Steinway Homing Pigeon Club.

This section of Queens was mostly farmland when the family began buying and building there, in 1870, but under their influence– particularly that of William Steinway, one of the founder’s five sons–it became a busy community of mostly German-born tradesmen and their families. After only twenty years in the United States, the Steinways had firmly established themselves as the country’s–and, many would say, the world’s–pre-eminent piano makers, and they were quick to take up the civic and commercial activities that went with the role of successful New World businessmen. For the children of their neighborhood they supplied a park, a kindergarten, and a library, and they subsidized the teaching of music and German–the common tongue of their factory–at the local public school. For the adults they built public baths and row houses for sale at agreeable terms. As commercial ventures, William Steinway, who dabbled in Democratic Party politics and claimed Grover Cleveland as a lifelong friend, brought to Astoria a ferry company, a streetcar line, and the Daimler Motor Company, an American licensee of the German firm that later made the Mercedes-Benz. Officially, the area was called Long Island City–as it is today–but to the post office and the residents it was Steinway Village.

Little remains of William Steinway’s sidelines in Astoria, and most of the land originally held by the family was sold long ago. The factory, once a model of efficient design and construction, is noisy, dirty, and poorly laid out by modern standards, and its neighborhood is sometimes smelly and often desolate. The company, once one of the largest of more than 250 American piano manufacturers, is now, in terms of unit volume, a relatively small concern in an industry dominated by giants: the New York factory produces about 3,400 pianos annually, less than 2 percent of the total U.S. market. (A branch factory, opened in Hamburg in 1880, produces another 1,900 yearly for the European market.) Held closely by the family for nearly 120 years, the corporation was sold in 1972 to CBS, whose musical- instruments division also produces Gemeinhardt flutes, Fender guitars, Rogers drums, and Lyon & Healy harps. When John H. Steinway, now sixty-five, great-grandson of the patriarch, retires as chairman of the board, he will leave Steinway & Sons in the hands of non- family members for the first time in its history

Still, as the multitude of Steinways in the Queens telephone directory suggests, something lasting was established there in the nineteenth century, and much at Steinway & Sons remains the same. Henry Z. Steinway, John’s older brother and his predecessor as board chairman, still serves the company as a consultant, working in offices above Steinway’s showrooms on 57th Street in Manhattan, about a block away from Carnegie Hall. John Steinway, who may make a similar arrangement, can be found most days at his plain desk in the large, open office room adjacent to the factory, working in his shirtsleeves. One floor above him, draftsmen and engineers study drawings created by his forebears a century ago, and the piano produced out in the factory is essentially the same as the one with which the company revolutionized the industry in the 1860s and 1870s. Though the workers today come more often from the Third World than the Old World–Spanish is more likely to be heard in the lunchroom than German–and though many of them now work at huge, floor-rattling veneer presses and sanding machines instead of at quiet benches, they are still, like their predecessors, immigrants who came to New York to seek work for themselves and something better for their children. And, as some of the taxi drivers in Astoria will tell you, they still make what is known in many quarters as the finest piano in the world.

When I first visited the Steinway & Sons plant, on a hot, sticky morning last summer, Peter Perez, then the president of the company, took me on a hurried tour of the premises. I recall very little of the tour’s middle parts, but I was struck dumb by its beginning and end-the lumberyard and the loading dock, where I saw essentially the same things I would have seen a hundred years before. The lumberyard, just outside the south wail of the factory complex, was a most unimpressive sight. Perez told me that I was looking at more than a million dollars’ worth of wood from many faraway places, but all I saw was stack after stack of boards discolored by the elements; to my unschooled eye, they looked unfit for a little boy’s tree-house. Seconds later, however–or so it seemed–I stood on the loading dock, at the north end of the factory, and there I beheld a Steinway model D, the eight-foot, eleven-and-three-quarter-inch, $28,000 concert grand piano on which the company’s coveted reputation rests. It seemed to me a sculpture. This was the model played by Josef Hofmann, Vladimir Horowitz, and countless other great artists. The pianist and historian Arthur Loesser, a man not given to syrupy enthusiasms, had once described its sound as “a tone that craved to stream out of itself, to blend with all other tone, to merge ecstatically into a universal ocean of tone.” According to a much-repeated estimate made years ago, it comprised some 12,000 parts, from inch-long bits of maple to a 340-pound plate of cast iron. It had taken nearly a year to build and had passed through the hands of more than 200 workers. None of these facts, however, impressed me as much as the look of the thing: the sinuous curves of its open top, the bold diagonals of its bass strings; its satiny black lacquer, vivid red felt and cloth, brilliant white keys, and lustrous brass-colored metal. It reeked of quality. I marveled that it had been made from a pile of dusty, weather-beaten wood, and I returned the next day to see how it had been done.

On August 21, 1981, I went to the fourth floor of the plant to meet a few parts: a rim that had been constructed in early February; a soundboard that had been finished in June; a cast-iron plate that had been delivered from a foundry in Ohio at about the same time. A model D–its name would be K 2571–was about to be constructed from these parts and thousands of others, and I planned to attend the creation. A supervisor on the floor heard of my intention and amused himself with it. He made a few quick mental calculations and announced, grinning, “You’ll be with us for Christmas!” I was.