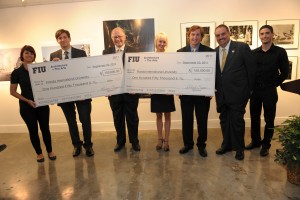 Florida International University’s College of Architecture + The Arts received two $150,000 donations from brothers who wanted to help launch the college’s new Miami Beach Urban Studios.
The $300,000 donation from Ronen and Dr. Gilad Segev represents the first gift since the site opened on Sept. 20, housing graduate design studios for architecture, landscape architecture and interior architecture students, practice rooms for music students, exhibition and graduate studios for visual arts students, performance spaces for theatre students, and classrooms for communication arts students. FIU named the dean’s suite as the Segev Family Dean’s Suite. The gift was announced at the September 20 studio kickoff, which included performances by FIU’s jazz ensemble on a Steinway Grand Piano, interactive displays with the architecture students, and a walk through of the space for the general public.
“I want to thank Gilad and Ronen Segev for their belief in the College of Architecture + The Arts and what we can accomplish on South Beach,” said Dean Brian Schriner. “This generous gift is a testament to the hunger this community has for a strong FIU presence on Miami Beach. I look forward to working with our new neighbors to forge strong partnerships and meaningful relationships.”
Dr. Gilad Segev expressed his excitement with FIU’s new Miami Beach Urban Studios: “Ronen and I are thrilled that FIU has decided to create a strong presence in the heart of south beach, and we are pleased to support the school’s efforts to integrate their campus with the community at-large.”