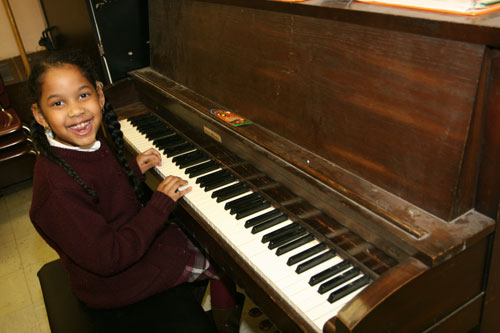 Music has everything to do with math, science and education. To substantiate this premise, we can quote statistics and studies that show how a large portion of scientists, mathematicians and doctors are amateur musicians with a solid background and training in music. But to discover how music is of such fundamental importance to the education of our children, we need to dig even deeper and ultimately answer the real question; how and why has our modern culture disconnected music study from education? As this is a very complex issue, we can only answer this question in part, since a thoroughly comprehensive answer is beyond the scope of this article

But first we need to go back 3000 years or so. In the ancient Greek civilization, music was considered along with science, astronomy and mathematics as a primary and necessary study in the pursuit of truth and knowledge. Philosophers and thinkers of that era mathematically calculated the musical scale and tonal system and applied additional calculations in designing the musical instruments so musicians could express the cultural esthetics of that time.

Indeed, the musical and tonal systems and instruments that have been used by all civilizations throughout history were conceived in a similar fashion. Through imagination, calculations, esthetics, practical application of esthetics or what is known as music and art.

The modern piano and twentieth century piano tuning resulted in a similar fashion. Essentially, you had over a period of roughly 150 years, extended debates, discussions, experiments, disagreements by theorists, mathematicians, many of whom were musicians or who worked closely with musicians about what a piano should look like, sound like and what kind of tuning would best support the music. All the while music was being played and instrument design and tuning was continually modified in order to accommodate the ever changing musical esthetics.

The purpose of this brief historical exposition is the following. Here we are in the 21st century and we have as a civilization and certainly as a culture lost sight of these important connections. If there were a process in all past civilizations whereby man inquired into the nature of the universe and connected music with astronomy and philosophy, where does that leave us in the present. Have we really evolved or are we devolving.

Mathematics, science, music, art all have one thing in common which is higher thinking, creative thinking, critical thinking; in other words, the ability to think. So I have to conclude that the problem with our politicians and education bureaucrats who declare music as an unessential and as a casualty of budget woes, is a symptom of their inability to think and make the right decisions and choices in a bureaucracy embodied with a hubris of misplaced priorities. Their line of “reason” that declares music as an unessential is also a result that delivers music education as a casualty of our modern American compulsion of relentless commoditization of esthetics, art and just about everything and holding that up as the as the holy grail. True art and beauty and expression can never be a commodity any more than a rainbow can. When we fail to pass on to the next generation a suggestion, a map or pointer to the higher strata of human sensibilities, and consciousness, we end up with reality shows.

This article was written by Eben Goresko – Webmaster and Editor of Piano Talk Online, Piano TV and Colorado Piano Buyers Guide, to name a few.